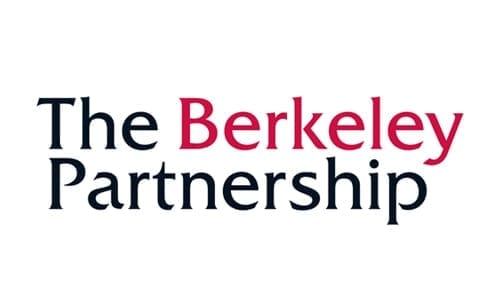 In 2018 amid a period of sustained growth, The Berkeley Partnership moved its UK office to new premises in Farringdon Street, London.

Whilst maintaining the welcoming, inclusive and creative environment with which its clients were familiar, the new location provided more space and improved facilities.

With communication being key to every aspect of the company’s business, the partnership approached MVS to aid them in deploying the best possible AV technology in their new home.

MVS Audio Visual was engaged to supply all AV solutions across the new office. We were selected via a competitive tender process and were successful ahead of multiple AV integrators due to our knowledge, attention to detail and passion for what we do.

The Berkeley Partnership chose Zoom as their preferred UC platform across all users and meeting rooms and it was up to MVS to assist in the design and implementation of the appropriate Zoom Room hardware to support the great service that Zoom provides.

The rooms involved in the projects were:

How did we deliver the meeting room AV solution?

Before the final implementation was decided, MVS installed 2x trial Zoom Rooms at The Berkeley Partnership’s previous office for testing and staff feedback ensuring the right meeting room solution was used in the new office. This was a great success and really helped the client make the right decision for their business.

The first area to be considered comprised two rooms, each separately accommodating 8-10 people, which could be opened up into a single, larger room.

A further 2 rooms, each accommodating 12 people, could also be opened up into a large single boardroom seating up to 24 people plus extra standing. As well as being opened up into a single space, by means of a glass folding wall, the rooms opened up into the immediate space outside the room for use in town hall meetings, staff breakouts and large presentations accommodating around 100 people.

A little bit of technical

In the smaller of the divisible rooms, 1x BiampTCM-1 and 1x TCM EX Expansion microphones covered the space. Since each of the microphones only uses a single channel of AEC, it was possible to use the smallest Biamp DSP in the shape of the TesiraForte VT4 AVB to cover this area. In the larger divisible room, 2 x TCM-1 and 2 x TCM-1 EX covered the space. In this area the larger TesiraForte CI AVB unit covered not only the meeting room(s) but the adjacent ‘town hall’ space for the addition of further radio microphones and a background music system.

The system in all divisible meeting rooms and town hall space was controlled via a Crestron TSW-760 touch screen for simple easy-to-use controls of the AV system.

The client wanted to keep all control on the touchscreen to a minimum to avoid staff confusion, therefore, MVS also installed contact sensors in each of the folding doors, so, when activated they would send automated commands to the system to ensure staff could walk into the room and all the equipment “just works”. This was very well received by the team.

For 6 remaining small meeting or huddle rooms designed for groups of 2-6 people which required simplicity of use whilst maintaining audio quality, MVS created Zoom Rooms with Yamaha Revolabs FLX UC 500 USB Conference Phones, providing a simple table-top unit, with great microphone and speaker clarity for Zoom calls. Huddly Go USB cameras were used for a sharp image and wide angle view to ensure all participants are covered during meetings.

As with all Zoom Rooms, the user requires a tablet to control the system. MVS provided iPads for all room controllers to keep consistency across all rooms. In total the Berkeley Partnership have 11 operational Zoom Room licenses as well as licenses for all staff to use on their laptop/tablet/other devices.

The last meeting room AV items that we installed were two display screens around the office providing users with an overview of meeting room usage to enable staff to identify if meeting rooms are available. 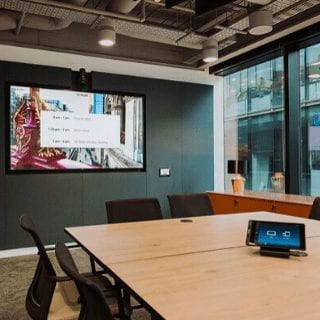 “It is great to see the usage of all meeting rooms has far exceeded all expectations, and all feedback from staff is how great they are and easy to use. At last check, the conferencing usage had increased over 150% from the previous office.

I have loved working with The Berkeley Partnership team during this project and moving forward as they have many similar company values to our own, and it felt like working with family on this project.”